Welcome to the Zulu Kingdom...

South Africa's Kwa-Zulu Natal province, also known as Zulu Kingdom is a spectacular, multi-cultural masterpiece that offers an exciting blend of breathtaking beach, bush and mountains. Flanked by the warm Indian Ocean to the east and soaring peaks to the west, with savanna grasslands that are home to big game and rich history, it is definitely a place you need to see.

The province is divided into the following regions, each with its own unique attractions:

The rugged and wild South Coast is home to a number of natural wonders from nature reserves to the 400 meter deep Oribi Gorge, a popular destination for hikers and thrill seekers looking to bungee swing or abseil in a spectacular setting amid waterfalls and tropical vegetation. The south coast is also home to the famous annual Sardine Run.

The North Coast offers a more cosmopolitan feel that makes it one of the most popular local and international tourist destinations. From the province's multi-cultural port city Durban (Africa's busiest port) to Umhlanga, Ballito and beyond, you'll find long stretches of golden beachfront, with warm ocean waves crashing upon the shore, home to frolicking pods of dolphins all year round and majestic seasonal whale migrations.

Natal's Elephant Coast is home to some of the country's renowned Big Five nature reserves including the Hluhluwe-iMfolozi Park and the iSimangaliso (Greater St Lucia) Wetland Park. Both of which offer unspoilt wetlands where wildlife abound and play host to Africa's Big 5. They also boast exquisite beaches where sea turtles come to shore to lay their eggs. A World Heritage Site, iSimangaliso spans 220km from Cape St Lucia to the Mozambique border. The area is host to Lake St Lucia and the St Lucia Estuary an area rich in lake networks, spectacular sand dunes, subtropical forests, swamps and wetland systems and all of the wildlife and marine animals that inhabit them.

Steeped in culture and history, the Natal midlands are known for their unique arts and crafts, game viewing oppportunities as well as the historical British, Boer and Zulu battlefields of bygone eras.

The Drakensberg Mountains range offers some of the most spectacular scenery one can imagine. The area is divided into four valleys, the central Drakensberg is home to Champagne Valley, there is the Cathedral Peak and Didima Valley, Royal Natal National Park and Amphitheatre Valley, and then in the north, the Middledale Pass Valley. Each of these regions offers unique beauty and character with its own set of activities, but all have spectacular mountains as their backdrop.

With so much to see it's great to keep the following in mind: 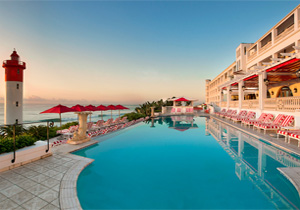 Get a FREE NIGHT with our exclusive offer

Whether you're looking to book a romantic getaway or short family break, Umhlanga's Oyster Box Hotel offers you the ultimate in luxury and style, with a personal touch that make for an unforgettable stay! 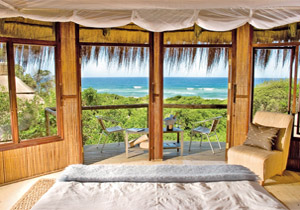 Get a FREE NIGHT with our exclusive offer

Set above a secluded bay in a magnificent coastal dune forest just meters from the uspoilt stretches of beach in Mabibi, on the shores of Kwa-Zulu Natal's Elephant Coast, Thonga Beach Lodge is a little piece of paradise waiting to be discovered.