Located on South Africa's south west coast, Cape Town, also known as The Mother City, is a thriving metropolis that offers breathtaking scenery from magnificent sandy beaches and oceans, mountain ranges with Table Mountain as their centrepiece, to vast game reserves that teem with an abundance of wildlife and spectacular wine farms.

It is a city steeped in history and culture, home to the first European settlers and the infamous Robben Island, the penitentiary island upon which former president Mr Nelson Mandela spent 27 years of his life in imprisonment.

Cape Town is also Africa's most popular tourist destination, thanks to its spectacular setting, warm Mediterranean climate, well-developed infrastructure and the sheer variety of all it has to offer.

Places you simply HAVE to see when visiting this spectacular city 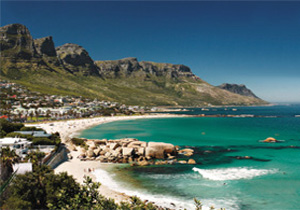 12 magical nights in one of SA's most scenic areas

Experience the best of the Beach & Bush! Take in the wonders of South Africa's spectacular Mother City Cape Town before discovering the glorious natural beauty of the Garden Route...